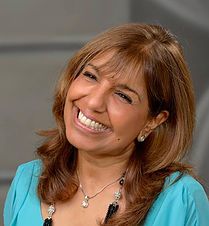 Nalanie was born in 1954 into a distinguished, leading family in Hong Kong, the Harilelas. Nurtured by very spiritual Hindu parents and educated at a Catholic convent school, she grew up in the presence of a close family friend, who, unbeknown at the time, was to have a deep and lasting influence in her life. This frequent visitor and friend was Sri Swami Satchidananda, her beloved Gurudeva. She attended university in the United States where she read Philosophy, Psychology, and Fine Arts. In 1975, she moved to Gibraltar with her husband Shanky, where, for many years, they ran a very successful fashion business. Nalanie continued her study of Philosophy and Psychology whilst running a very popular dance school and raising their two children, a boy and a girl, Shani and Shaman. Shanky and Nalanie are now the proud grandparents of four beautiful girls, Tara, Natasha, Talia, Indira and Shahan. In 1986 Nalanie formally became a disciple of His Holiness, Sri Swami Satchidananda and began her continuing study of the Science of Yoga. She has been accredited by the Council of Teachers of the Satchidananda Ashram in Virginia, U.S.A., to teach Asanas, Pranayama, and Meditation. She is also an accredited teacher-trainer for Integral Yoga and a therapist under the British School of Yoga. She is the Chairman of the Integral Yoga Centre in Gibraltar, where she runs regular weekly satsangs, teacher training, and counseling sessions. This Centre is a registered Charity serving the community. Under her guidance it is run completely by volunteers and has seen a remarkable growth in attendance and classes. The Centre regularly raises significant amounts of funding for charities both in Gibraltar and abroad. Selfless service in action. Nalanie is also the founder of an orphanage and school that is being built in Nepal. Nalanie who now lives in Spain, frequently lectures on the Science of Yoga in Portugal, Spain, Germany, the United Kingdom, the USA and the Far East. She has also been Interviewed on CNN television. The Governor’s Medal, granted by her Majesty the Queen, in The New Year’s Honours, was awarded to Nalanie, for “meritorious service to Humanity”. This was presented to her at the Governor’s residence in Gibraltar on the 28th March, 2008 . On 18th October, 2008 Nalanie received a “Humanitarian Award” from Satchidananda Áshram in Virginia, the Áshram founded by her Master, Sri Swami Satchidananda. Nalanie has also gone through a most devastating loss in her own life, losing her beloved husband Shanky to unexpected cancer, after 34 years of happy marriage. She has astounded her family and close friends with her unbending strength of total faith in God´s perfect plan, her never ending compassion and love, and her honest sharing of her tragedy. She has proven that she walks her talk – it is true yoga in action! She is the first of a new generation of spiritual teachers. Her particular upbringing and education has given her a special insight into both Hinduism and Christianity. Her service to humanity is global, praying for world peace is always at the forefront of her mind. She always sees the bigger picture, following in the footsteps of her Guru. Spreading His teachings where ever she goes. Constantly up-lifting souls and loving them unconditionally. Her example as a wife, mother, businesswoman, and now, grandmother, who has devoted her life to God and His service, has been a beacon to her students. She shows that it is not necessary to withdraw from life in order to find the “Guru within.”